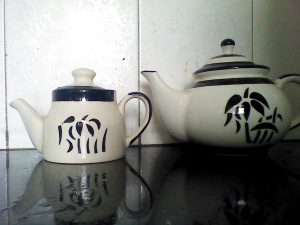 Tea drinking in the past was a social event. A pot of tea was an invitation for friends and family to have a sit-down and a pleasant chat. Today the demise of the tea-pot has been caused by damned tea bags. Tea has fallen on segregated days, even coffee is more social. The desire for fast food has spawned the tea bag, I feel.

NOT MY CUP OF TEA
Tea is still not so universally accepted in the Americas. Coffee it seems rules the roost. Otherwise tea adapts to new locations. In Tibet they have it with butter and salt. People have it with sugar and milk. The British had a lot to do with spreading tea culture. The British have always been wise in their commercial tactics. Tea showed that the English were not only penny wise but Pound wise too. Tea was a great commodity to make a profit out of.

The tea bag is a modern contraption. It allows you that superb moment alone with your tea cup. This is a creation of advertising. It is also a creation of our single existence. The desire for a half an hour alone undisturbed by anyone or anything is becoming all pervasive.
Surprisingly the big boy of tea consumption in the world is Turkey. Number two is Morocco. A surprising third position is bagged by Ireland. Number five is UK. India produces and consumes a lot of tea but because of the vast population and poverty the per capita consumption is very low. Tea is called chai in Turkey and India too. Tea consumed in Turkey is not imported but of a local variety grown near the Black Sea. Chai has become a universal alternate name for tea.

ANCIENT CHAI
China seems to be the most ancient user of tea. Japan only developed its own tea drinking ceremony when it was brought to the country by wandering monks. Chinese Emperor Shennong discovered the tea leaf in the year 2737 BC.
In ancient China tea was compressed in molds and sold in the form of bricks. Bricks of tea also served as an alternative currency. Imagine dipping a dollar into a cup and drinking it.
Tea was brought to Japan by one of its monks named Eisai who brought the plant to his homeland from China and planted it in his garden. The monk had gone to China to learn about Zen but came back with the knowledge of tea which eventually developed into the world famous tea ceremony of Japan.
In England the popularity of tea drinking was allegedly enhanced by the Duchess of Bedford. Anna the Seventh Duchess had a sinking feeling in the late afternoons which she cured with tea and some tit-bit to eat. Later she began to invite some of her friends to this late afternoon tea.

SOME OF US LOVE THE SAMOVAR

In Russia tea infiltrated as a gift from a Mongolian king to Tsar Michael I. The Russian potentate was reluctant to accept nearly seventy kilos of what looked like dry leaves. He relented when the Mongolian envoy insisted that the Tsar accept the gift. This was in 1636. Tea drinking has become a favorite pastime of Russians since then.
A samovar is a central piece of equipment in Russian tea drinking. A quaint practice of holding a sugar cube between teeth while sipping tea existed in the nineteenth century.

THE VILLAIN CAME IN A SACK

The villainous tea bag on the other hand is only a hundred and six years old. It really became popular when Tetley saw the commercial possibilities of the product and began selling tea bags seriously from 1953. The tea bag was inadvertently invented by Thomas Sullivan in 1908 in New York. He was a tea merchant and sent samples of his tea in small sachets of silk to possible clients. The clients seeing this tiny sack containing tea dunked it with alacrity into their tea cups. They were too lazy to open the tiny sacks. Thus was born the tea bags industry. It sounded the death knell for the tea pot and the samovar.