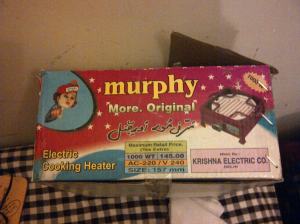 The intense cold made me rummage and seek out an old kitchen heater. The photograph on the box and the name of the heater company turned my mind to the famous Murphy baby. He was there on all Murphy radio advertisements. The baby became synonymous with the British Radio Brand.

It is still used as an attraction on locally manufactured products—the heater box is an example.

It also brings to mind the flagrant disregard of other people’s intellectual property rights. Indians and other South East Asians are very good at innovation, copying and plagiarism using already famous brands.

I bought a pair of wool socks. The manufacturer had cleverly named it as Wolvo. It is a combination of Wool and Volvo. Volvo is a big brand in India because of the luxury air-conditioned buses that ply between important cities.

As you can see from the caption on the bag, English as she is spoken in India is ‘More Original.’ Here the Murphy baby has been morphed into what seems like a Sikh child. It gives a hint about the manufacturer’s religion. The Urdu on the box also gives us a clue that this brand of heater is popular in Uttar Pradesh where it is still written and spoken.

Do not be surprised to see a barber’s shop names as Nokia or a tailoring establishment claiming to be Wimbledon.

Addendum: To curious souls the Murphy baby is now grown up and lives in New Delhi to an equally famous wife—Mandakini who was the hot star of Ram Teri Ganga Maili a Raj Kapoor super hit.

One thought on “More Original Plagiarism-Murphy Child Morphed; Oh To be Wolvo!”