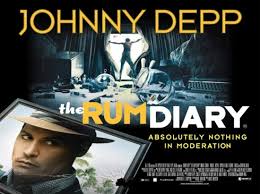 For a retired rum drinker(correction a retired from rum drinking) person this movie is a sight for sore eyes. The glorification and consumption of rum and other hallucinogens is of gigantic levels. The short quips and barbs which are, it seems, entirely a creation of the script writer (Bruce Robinson) are spoken by Johnny Depp. His dead pan rendering of them is funny and pleasing. Here are some samples-

‘Why should the FBI get the communists high?’

‘The smell of truth. I smell Ink.’

These are lines that tickle the creative soap bubbles of writers in attendance like me.

The book was written by Hunter Stockton Thompson.

The setting of the novel and movie is Puerto Rico.

It is rare that a movie inspires me to look for the book that gave birth to the script. In this case it has become necessary because the scriptwriter and director has admitted that he has only taken perhaps one line of dialogue from the original book. The scriptwriter in this case is Bruce Robinson and he is also the director of the movie.

The novel’s manuscript lay unappreciated for nearly four decades before it was printed. Johnny Depp himself dug it out of the author’s stuff in his (the author’s) presence. The manuscript was bandied about for a long time before the shooting started in 2009 and finished in 2011. Johnny Depp insisted on having Bruce Robinson (The Killing Fields) as the Director of the movie. Bruce Robinson also wrote the screenplay.

Indeed I find the story of the author and Johnny Depp’s obsession with the script as interesting as the movie.

‘Absolutely nothing in moderation’

“I hate to advocate drugs, alcohol, violence, or insanity to anyone, but they’ve always worked for me.”

The Rum Diary uses the real life adventures of Hunter S. Thompson when he worked as a Reporter in Puerto Rico in his youth. Indeed all his novels are an extreme mixture of autobiography and fiction. In the end even Thompson himself could not differentiate between his real persona and his fictional persona. He became a cult figure because of his drug promotions and his movie Fear and Loathing in Las Vegas. He is also the creator of Gonzo Journalism in which the reporter is the hero reporting the event or happening. He was a regular writer for Rolling Stone.

The casting of Michael Rispoli as Sala who is Paul Kemp’s (Johnny Depp) journalistic colleague in Puerto Rico is superb. Amber Heard as Chenault is a stunner. Aaron Eckhart (The Dark Knight-Harvey Dent) as Sanderson the real estate conman is convincing.

For me the movie was an introduction to Hunter S. Thompson whom I shall now seek in Fear and Loathing In Las Vegas.